Last year Loes Gunnewijk was second. She said: ,,That place for one year felt like a victory. Because it ended a period of misfortune at that time. But really, the win is even more beautifull. After a race with many attackes at the cobblestones and the three climbs up the VAM-berg (a hill near the village Drijber).

The winner attacked when things started to get quiet among the race’s leaders. Just before the final sprint would have begun. After her attack, she was encouraged by her team leader Jeroen Blijlevens. After the race Loes Gunnewijk was e very happy woman. ,,My team leader Jeroen Blijlvens shouted in my ear that I had a gap and had to keep going. That I succeeded is a dream come true. I have been, for a number of years, often close to a vivtory in a World Cup. But now I’ve got one. 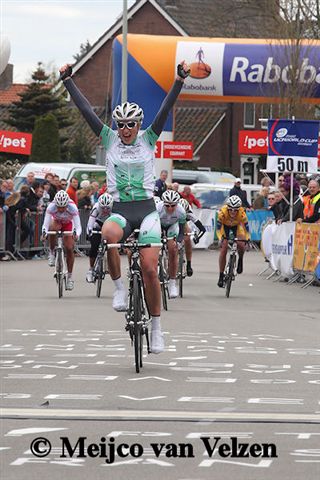